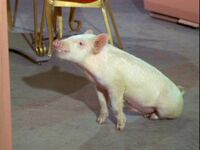 Arnold Ziffel is the adopted "son" of Fred and Doris Ziffel. He is a unique pig with human-like intelligence, capable of understanding others, turning on the TV by himself and engaging in other human activities. Despite being a pig, the Ziffels treat Arnold like their own son and he treats them like his parents, and because of this, Arnold also receives special treatment from the rest of Hooterville, being allowed to sit on furniture, buy goods at Sam Drucker's and is even allowed to attend Hooterville's elementary school.

Arnold looks like a common beige pig of the chester white breed and has no unique physical characteristics to tell him apart from similar pigs, but despite this, his parents can easily tell him apart from the rest of the pigs in their ownership. Arnold is also apparently long lived, having a similar lifespan to a human.

Being a pig, Arnold is often times quite lazy and gluttonous, but also possesses several human-like qualities. He mostly enjoys spending his time watching TV which is his favorite activity. When not doing that he is usually seen spending quality time with his parents or playing with other pigs, pets or even the local kids. He also seems fond of music and has great acting talent. Despite being a pig, he can fully understand what humans say to him, usually replying by nodding or turning his head to show his understanding, and can even follow instructions to a key. Because of his pampered life and being treated like a human, Arnold tends to be quite spoiled and often protests when told to turn off the TV.

By the time of the events in Return to Green Acres, Arnold is shown to still be alive, however his parents have passed away. Their tombstones are briefly seen being visited by Arnold who leaves flowers for his beloved parents. He is shown to be under the care of his "cousin" Daisy Ziffel who is the biological niece of the Ziffels and inherited their farm after their passing.

Arnold could be considered a bit of a "breakout character" for Green Acres, with his popularity growing considerably as the show went on, with him even getting more episodes focusing on him in later seasons. The character was very popular with children as well as adults, and young fans of the little pig even stopped eating pork products to show their affection for him, with the most notable case being a class of sixth graders from Ohio who swore off Pork Chops because of their love of Arnold.

After the first season of Green Acres, Arnold was played by several pigs, all of which varied in appearance and size in order to maintain the image of Arnold being a long lived piglet, and rumors often speculated as to what happened to the first pig, with some claiming that he was eaten by the cast after the first season, however these stories were proven to be false. The many pigs who played Arnold were trained by Frank Inn, like many of the other animals on the show, and the character of Arnold ended up winning over three PATSY Awards during the show's run.

Community content is available under CC-BY-SA unless otherwise noted.
Advertisement